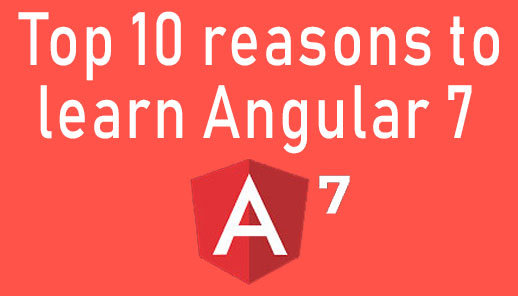 In the technology industry, Angular 7 is one of the most recognized frameworks of JavaScript. It is used for building desktop, web and mobile applications. Angular applications development includes Typescript usage which is a superset of JavaScript, along with the CSS, HTML etc. The code written in Typescript collects to JavaScript and is rendered in the browsers.

Connect to the institute which offers Advanced Angular 7 training in Kolkata.

For writing Angular code, Typescript is the main language. It is an optional statically typed language and it is a superset of JavaScript. Properties are included in class which can be called into view when required. The object-oriented feature is used by Typescript.

2) Powered by Microsoft, Developed and Maintained by Google:

Google develops and maintains the Angular 7. This framework is an invention of Google developer. It is expected that this will stay in the industry for a long time. For developing Angular 7 applications, Typescript is a prime language which is developed and maintained by Microsoft. This proves that Angular 7 is a highly recognized framework in the industry because the organization like Google and Microsoft are the foundation.

As we all know, Angular 7 is different from AngularJs. MVC pattern is followed by AngularJs whereas Angular 7 uses MVMM pattern. MVMM is the abbreviation of Model-View-ViewModel. It is a software design pattern and assumes to increase the readability and maintainability of the source code. The code is divided into three sections, i.e. Model-View-ViewModel.

The essential parts of Angular 7 are component. It is generally a JavaScript class with some metadata attached to it. How to process any particular class is told by metadata.

For a particular purpose, a module is a block of code which is created. Any single module exports value, a class or function which other modules can import it and make use of it.

The concept of Directives is there in Angular 7. It is a powerful code. The developer can write custom code and can control the behaviour of applications by using it. Directives can do a task, what a plain HTML cannot do. It extends the functionality of HTML. For the developers, there is a wide range of directives to select.

In Angular 7, the manipulations code of DOM is written in ng directives rather than in the view. The reason it gets integrated into HTML smoothly is that angular handle the view as normal HTML code which acts as the holder of the data. The advantage is that the UI developer has to concentrate on design and not on the behaviour.

The data model is in POJO (Plain Old JavaScript Object) and it is one of the important features of Angular 7. To integrate into the existing data source, one does not require to write external code for getter and setter of functions which is an advantage. There is no need of writing boilerplate code which helps to maintain the code easily and hence makes the code clean.

Angular 7 offers a great method of styling the component. One can write in global CSS or component specific style. Inside template, inline style can also be written.

Summing up this article, we get to know that it is very beneficial to learn Angular 7. Their unique features and uses have made it exceptional. All the above points mentioned proves that Angular 7 has a large impact on the industry and will stay there for a long time. Through Angular 7, developing applications has become easy and fast. To get complete training, join the Angular 7 training center in Kolkata which will give you training as per the industry.

Hence it is worth learning!